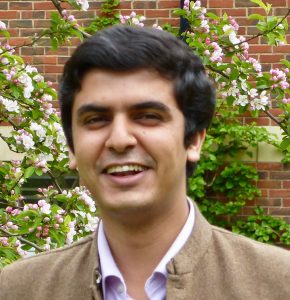 A warm welcome to our new fellow Siddharth Pandey who joins the Kolleg until autumn 2023.

Siddharth Pandey is a writer, photographer and curator from the Shimla Himalayas holding a PhD in English and Materiality Studies Cambridge University. He has held fellowships in global history and art history at LMU, Yale, and the Paul Mellon Centre, and he has received the Charles Wallace India Trust Award. Pandey's research interests span a variety of fields, such as fantasy and children’s literature, nature writing, craft theory, folk culture, cinema studies and pop culture. His first book, Fossil, explored the Himalayas through a geo-mythological-poetic lens and is a finalist for the Banff Film and Mountain Literature Festival. His photographic-curatorial work has appeared in the Victoria and Albert Museum and the Oriental Museum in Durham, among other institutions.

My project, ‘This fissured land’: ecological aesthetics, dwelling perspective and modernity's entanglements in the Western Himalayas, interprets global dis:connections in the Himachal Himalayas of North India. Taking the Western Himalayan landscape and its various cultural practitioners as my sources, I develop an interdisciplinary perspective on how this terrain as a land of belonging and natural-cultural rootedness. Drawing upon those sources, I hope to enrichthe conversation on living and being among different people and ideas. I also study how this sense of belonging —traditionally associated with a sensitive ecological attunement and aesthetic fulfillment — is threatened by modernity's multifaceted pressures. Interweaving the concept of ‘dwelling perspective’ with a host of methodologies, I seek a fresh, creative exposition of connections and disconnections in the mountainous realm, one that resonates with other such spaces as well.