Dis:connected Cold Wars: rethinking the existence of a vanished state in global history 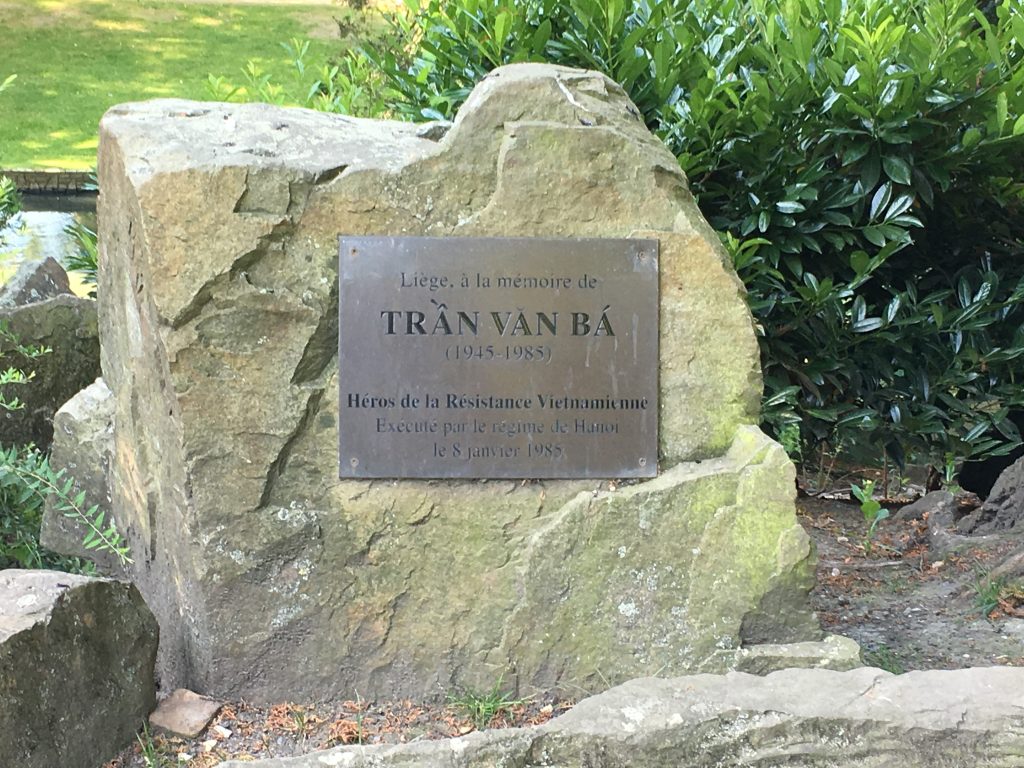 On a springtime walk in one of the green parks in the Belgian city of Liège, I was astounded to discover a stele commemorating Vietnamese anti-communist Tran Van Ba. This memorial turned out to be the perfect embodiment of the aesthetics of Cold War omission. It piqued my curiosity. Liège, situated in the Meuse valley, is known as the former industrial backbone of Wallonia. What was a stele in memory Tran Van Ba doing here? Though I had originally planned to discover explore the industrial heritage of Liège and to visit the House of Metallurgy and Industry that day, I decided to go back to my hotel to learn more about Tran Van Ba instead. On the way back to my hotel, I remembered the name Tran Van Ba as a whisper echoing from the chaos of French colonial archives in Aix-en-Provence. My small hotel room had a funky atmosphere, like a 1970s youth hostel. I turned my computer on. I felt like I was going to solve a mystery like Sherlock Holmes. Who was Tran Van Ba? Who had built this stele? Here Google would serve as Dr Watson, my loyal assistant. Tran Van Ba was a major figure of the Cold War, to whom Reagan awarded the Medal of Liberty. My preliminary investigation revealed that many Vietnamese in exile saw Ban as a martyr of the struggle against communism.  On 8 January 1985, roughly a decade after the end of the American war in Vietnam, Tran Van Ba (1945-1985) was executed for high treason in Thu Duc, a municipality close to Ho Chi Minh City. It was an ignominious end to a life deeply marked by the violent upheaval Vietnam witnessed throughout the twentieth century. 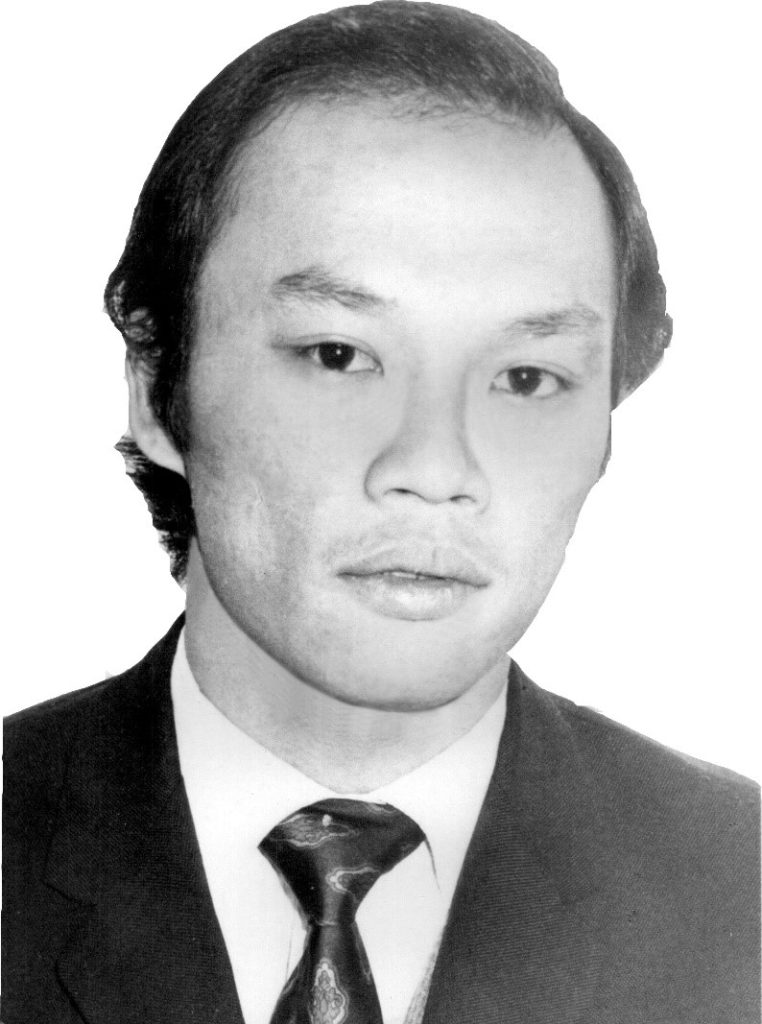 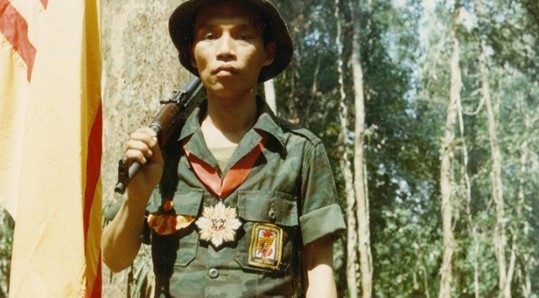 What a difference a uniform makes. (Image: indomemoires)

The disconnections in the history of Vietnam during the Cold War became visible in societies at the end of the Cold War. The fall of Saigon catalysed the mass exodus of Vietnamese ‘boat people’. Transnational exile networks grew throughout the worldwide diaspora. They built upon the pre-existing Vietnamese students’ and anti-communist networks that had emerged in Western Europe, the United States and Australia. These disconnections transformed the political, social and visual landscapes of the cities where the boat people lived in exile. For them, the flag of South Vietnam became the symbol of freedom from North Vietnam. It consists of a yellow background, symbolising the Empire of Vietnam, with three red horizontal stripes through the middle, emblematic of the common blood running through North, Central, and South Vietnam. In Alt-Mariendorf in south Berlin, Hannover, Hamburg and Stuttgart, this flag is displayed during the Vietnamese communities’ gatherings to call for democracy in a unified Vietnam. On 21 October 1990, in the United States, former soldiers and refugees from the former South Vietnamese regime founded the Provisional National Government of Vietnam, headquartered in Orange County and Little Saigon. Dao Minh Quan was elected as the president of the newly created ‘Third Republic of Vietnam’. US government staff gave speeches and expressed hope that the newly elected president would work closely with the USA. Yet, for many exiled Vietnamese, Dao Minh Quan did not have any political legitimacy. He was only interested in embezzling from the provisional government. In Europe, Vietnamese diasporas are still fighting against the communist Vietnamese regime. They consider the current regime ‘authoritarian and corrupt’. They denounce human rights abuses in Vietnam. In parallel with this political struggle, the exiled Vietnamese communities are committed to building sites of memory. In Hamburg, Liège and Geneva, members of the Vietnamese diaspora have contacted municipal authorities to install steles commemorating the boat people. The mayor of Paris first agreed to the installation of a plaque in memory of Tran Van Ba in the 13th arrondissement in 2008. The Vietnamese embassy protested to French authorities, who eventually renounced the plaque. In Liège, a statue honouring Tran Van Ba was erected on 30 June 2006. Local and Belgian national newspapers, such as Le Soir, La Libre Belgique and La Meuse published articles on Tran Van Ba as well as on the boat people at that time. Every year, on 8 January, the Vietnamese exiled community in Liège pays respect to Tran Van Ba, a ‘martyr of communism’. The Vietnamese government considers these commemorations problematic. It listed the Provisional National Government of Vietnam as a terrorist organisation and condemns the efforts of the Vietnamese diaspora to overthrow the current regime. It is said that the Cold War ended with the fall of the Berlin Wall. In fact, it continues in the streets and the squares of Liège, Berlin, Paris, Orange County and Little Saigon. In my small room in Liège, I was reflecting on my own investigations. To no one’s surprise, Google is a wonderful fount of information. I never regretted not visiting the House of Metallurgy and Industry in Liège and or skipping my exploration of its industrial heritage. I thought to myself how a series of disconnections resulted in the creation of a statue in a Belgian city, and how the complexities of global disconnections have transformed our societies. [1] Statement at the meeting of 27 January 1956 organised by the Comité d'Action des intellectuels contre la poursuite de la guerre en Afrique du Nord. [2] Raymond Aron, ‘Bandoeng: Conférence de l’équivoque’, Le Figaro, 27 April 1955, 1. [3] ‘Konferentsiia Stran Azii i Afriki Zakonchila Svoiu Rabotu’, Pravda, 25 April 1955, 4. [4] Interviews of members of the Vietnamese diaspora in Berlin in November 2021.