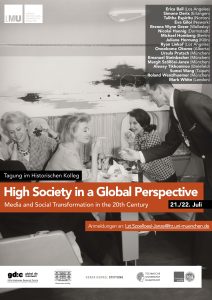 On 21 and 22 July 2022, the international conference “High Society in a Global Perspective. Media and Social Transformation in the 20th Century” will take place at the Historisches Kolleg in Munich.

At the beginning of the 20th century and thus earlier than previously assumed, the so called High Society developed as a new social formation in North America. It was largely constituted by mass media visibility and thus offered an (additional) alternative to social advancement through economic success, family relationships or status. The High Society was actually much more open and dynamic than the upper class of the Gilded Age. At the same time, however, media visibility created an ambivalent interplay of empowerment and disempowerment that affected social structural categories such as gender, age, body, and family and created new social asymmetries.

The conference will focus on the question of the extent to which comparable media logics and social formation processes developed simultaneously or with a time lag in other countries and regions, as in the case of the High Society in North America. In addition, did a global networking of people attributed to the High Society, of media professionals, and of various media sub-publics take place during this period?

The event has been organized by Nicolai Hannig (Darmstadt), Juliane Hornung (Cologne) and Margit Szöllösi-Janze (Munich). The Käte Hamburger Research Centre global dis:connect acts as co-host. The conference will take place at the Historisches Kolleg, Kaulbachstrasse 15, in Munich.