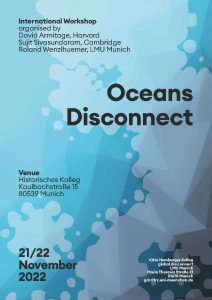 On 21 and 22 November the Centre will hold an international workshop focused on Oceans Disconnect.

“Oceans connect” was the motto of the first wave of oceanic history in the 1990s: journal issues bore the title, as did a germinal research group. The slogan reflected the explicit ambition of its practitioners to go beyond the nation-state but also encoded the implicit teleological logic of globalisation at the time: that the world was becoming one, that barriers and borders were melting into air, and that the fluidity of “liquid modernity” began with, and upon, the ocean as a matrix of integrative processes. Accordingly, over the past three decades, the rapidly expanding historical literature on oceans and seas has traditionally been framed around the geographical units of the world’s water bodies; it has been directed towards tracking long-distance connections, so as to problematise the political and specialist organisation of historical knowledge around “nation”, “area” and “civilisation.”

Yet the promise of the first, boosterish, phase of oceanic history has lately ebbed. Globalisation now looks more reversible and halting. And transnational historians more generally are examining disconnection rather than connection as a dynamic in world history. Along these lines, new work in oceanic history is insisting on particularity, friction, interruption, materiality and resistance. There is growing attention to the critical foundations of connection, where people, things, ideas, legal systems, could demonstrate instability, violence, and invisibility at the very nodes of globalisation. And historians are increasingly focusing on the choke-points within theworld’s oceans: straits and narrows, gulfs and bays; pirates’ nests and contested waters; natural disaster and commercial risk; closed seas and maritime limits, among other topics.

This conference, hosted by the new Käte Hamburger Research Centre, with its innovative focus on dis:connection, and also by two leading scholars of the Indian, Pacific and Atlantic Oceans, will interrogate the underside of connection and the dynamics of disconnection in oceanic history.