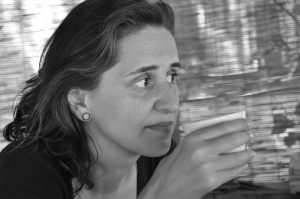 A warm welcome to our new fellow Viviana Iacob who joins the Kolleg until autumn 2023.

Viviana Iacob is a theatre historian with a background in the history of art and theatre as well as Shakespeare studies. Her work relies on interdisciplinary methodologies and a trans-regional reading of post-war Eastern European theatre cultures and focuses on the global history of illiberal regimes during the Cold War and its aftermath. She has conducted archival research on the history of international theatre organisations and their role in globalising state-socialist cultures after 1945 in Romania, Hungary, Bulgaria, Germany and France. Between May 2020 and July 2022 she was a Humboldt fellow, which gave her the opportunity to develop a monograph that explores the circulations and contributions of Eastern European theatre practitioners in international organisations. These trajectories of expertise reflect North-East-South entanglements and networks forged at the intersection of Cold War politics, decolonisation and globalisation.

The project re-historicises the relationship between globalisation and theatre by analysing the practices of internationalisation and cultural diplomacy deployed by illiberal regimes before and after 1989. The project identifies trans-regional dis:connections that differ from those converging on or emerging from the West. The research combines the study of late-Cold War globalisation processes with a focus on international theatre organisations.  By highlighting alternative globalities, the project addresses patterns of integration and disintegration that have been marginalised by entrenched Western-centric discourses on recent histories of theatre.