On a reading and discussion with Timo Feldhaus in conversation with Urs Büttner, 4 July 2023 (By burcu dogramaci) 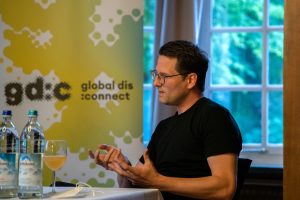 We at global dis:connect were privileged to host a reading by Timo Feldhaus from his book Mary Shelley’s Zimmer. Als 1816 ein Vulkan die Erde verdunkelte (Rowohlt, 2022). The event was lively and well-attended, due in no small part to the conversation with Urs Büttner, a scholar of 19th-century German literature. The discussion yielded many insights into dis:connective events related to the eruption of Mount Tambora volcano (Sumbawa, modern Indonesia) and its aftermaths — historical, literary and artistic. 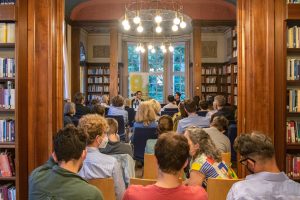 First, the climate changes in Europe and the Western Hemisphere at the time were not inextricably associated with the eruption in the opposing hemisphere. Timo Feldhaus thus ties and connects natural events and, for example, the creation of Mary Shelley’s book Frankenstein; or The Modern Prometheus (1818) in a climatically clouded Europe. Such connections did not seem evident in the 19th century. Although contemporary scientists and artists alike evinced great interest in weather phenomena, this knowledge was not widespread at the time. 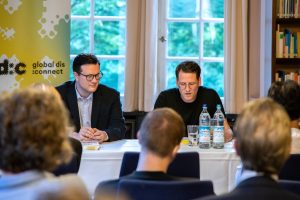 Mary Shelley’s life and work around the inception of her Frankenstein novel is the nucleus of Timo Feldhaus’s book. Its chapters are repeatedly interrupted by other stories and appearances by her contemporaries from Turnvater Jahn and Johann Wolfgang von Goethe to the painter Caspar David Friedrich. The result is a composite view of unusual constellations, unconnected and connected events, science fiction, romantic relationships, nationalism, the science of clouds and natural disasters.