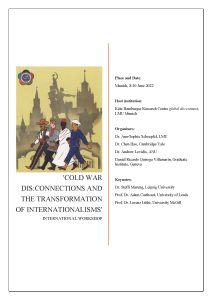 This workshop explores Cold War internationalisms – their promises, possibilities, and practices. The focus grows out of our shared belief that despite recent methodological developments in the field, we still have an incomplete view of internationalism(s) entangled histories, ruptures, jagged temporalities, and multiple incarnations, which internationalisms took in the global Cold War.

A wealth of recent Cold War scholarship has stretched at the conceptual and temporal registers of the global conflict (1917-1989) incorporating new questions related to superpower conflict, modernisation, international development, decolonisation and postcolonial competition, and nation-state building. This conceptual shift presaged a structural move from an interpretive frame that privileged a ‘vertical’ focus on the top-down dissemination of Soviet American rivalry, to a ‘horizontal’ focus ’ of regional interconnections beyond the superpowers.

The dialogue and integration between traditional fields of diplomatic history and new social, cultural, and religious histories have illuminated the grassroots of the global conflict, reconstructing intimate histories of the ‘imagined realities’ through which the global conflict was (re-) produced in countries ‘peripheral’ to Cold War bipolarity, such as Indonesia, Philippines, and Tanzania.

In neighboring fields of international law and international relations, new waves of scholarship have foregrounded the cacophony of diverging voices from Asia, Africa to Latin America claiming the mantle of ‘international’ to remake the world in their own image. Indeed, a powerful thread embedded in this research agenda has been the exploration of twentieth-century liberal and illiberal internationalism.

Still, despite aspirations to the global, the new wave of Cold War histories remain stubbornly – and structurally – bound to a particular geographical and spatial zone. An inclusive and truly global history of internationalisms told through its overlapping trajectories, shared experiences, people-to-people, and movement-to-movement connections has yet to be written. Nor have histories of internationalism come to terms with global dimensions of concepts of order making, decline of internationalisms, and the post-imperial dynamics which shaped the international system after 1945.

Taking as our point of departure Lorenz Lüthi’s call for histories of the ‘interconnections and spillover effects within and among world regions’, this workshop will bring together early career researchers to consider the possibilities of what truly global history of internationalism in the Cold War might look like.  How might we revise standard interpretations of what the global conflict was and was not? With the shutting of archives across the world from China to Russia, what tools need to be developed to write global histories of internationalism?

You can find the full program here.