But what does this term really mean, and how can the concept nourish globalisation research and, with it, a better understanding of the present? One opportunity to discuss this question occurred on 2 December 2021 when global dis:connect hosted a self-consciously exploratory workshop on infrastructures with participants from its own ranks as well as from the German Historical Institute in Washington DC.

When we think about globalisation, we imagine Earth as a space where people, commodities and ideas are on the move. Such mobility would be impossible without transportation and communications infrastructures. Globality clearly consists of material connections between spatially remote elements as well as the ideas and perceptions our forebears had and we continue to have about them. Since the 19th century, experts, politicians and corporations have extended global infrastructures to achieve greater speed, freedom and prosperity. Being connected has long carried a predominantly positive connotation.

Networks, which have penetrated the lexicon of everyday life and the conceptual toolkit of historiography, are one example of connectivity’s good reputation. But as Christoph Streb stressed while looking at the Begriffsgeschichte of the term network until the 18th century, its connotation was negative. It invoked notions of closed (and therefore rather suspicious) circles or of being trapped in a net. This changed in the 19th century when the idea of infrastructure came into play. Network became closely connected to positive notions of movement and the flowing that it was thought to enable. This notion survived into the 20th century when network increasingly came to refer to interpersonal connections, much as we use the word today. 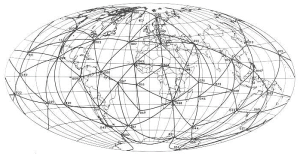 Tom Menger discussed this positive (Western) notion of infrastructure-based connectedness on a different level. Using the examples of the pioneering colonial oil infrastructure in British Burma (1880s) and German military units in the Ottoman vilayet of Mosul (1917), he showed that what Western observers perceived as proof of civilisation and their own technical prowess was more of a joint venture. The Western fantasy of bringing civilisation to the uncivilised was just that: a fantasy. How those infrastructures actually worked refutes this illusion. They did not run with modern Western technology alone, but with the help of local means and knowledge.

Indeed, each contribution problematised the Western view of infrastructure by taking a closer look at concrete circumstances. In contrast to predominant historical and contemporary narratives, they all drew attention to the failures as well as the successes. Infrastructure, the contributors argued, always disables and excludes just as it enables and includes. All agreed that infrastructure planning and building was densely entangled with dynamics of exclusion, as when modes of transportation and their spatial manifestations could become sites of exclusion and boundary-drawing.

Carolin Liebisch’s presentation on Migration and immobility at the airport is a stellar illustration. She told of the Jewish Grünwald family, who fled from Nazi Germany by airplane in the 1930s, to show the interplay between mobility-enabling infrastructures and restrictive mobility regimes. Because the required transit visa was denied, the family first went to Italy by train. From there they flew to London by plane, which at that time had to stopover in Germany. There, mother and daughter were taken from the plane and mistreated by Germans. On the one hand, this case shows how aviation is very fundamentally bound to Earth in the form of national control. On the other hand, the plane became a means of protection and humanitarianism: the pilot refused to leave the airport without the Jewish family members. 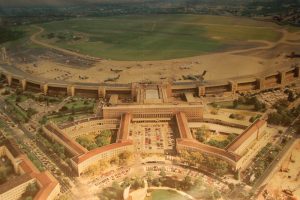 Tempelhof – named after a temple but built like a fortress. (Image: Walt Jabsco)

Nevertheless, Liebisch stressed that the drive to control and restrict the kinds of mobility that airports and aviation enable has a long history. In this example the airport figures as a national border post and a global place that is entangled in international relations at the same time. The airport serves as a fulcrum to explore uneven mobilities, which are regulated by viapolitics, which denotes the power to determine what forms of mobility are desirable and especially who may use them and go where. These differences are clearly depicted in the airport’s topography, which strictly separates the welcome from the outcasts.

Examining the Pan-American Railway, an important infrastructure project that – though never realised – fueled discussions for decades, Mario Peters confirmed this observation. Here, too, the question of desired and undesired connections was crucial. As elsewhere, the mobility of goods was usually welcomed, while the mobility of people was perceived as much more problematic. Moreover, uneven power relations and the fear of connectivity that could result might also have prevented the project’s fruition. Though Peters argued that this explanation might be too simplistic and those involved in the project were often divided along other lines, the planning commissions often were seen as divided between expansionist North Americans and South Americans wary of US imperialism.

Infrastructure’s potential use as a means of control was even more plainly stressed by Andreas Greiner. He showed that colonial powers in the 1930s saw aviation as a ‘tool of empire’, as a means of linkage and control in the face of mounting disintegration. Small wonder that the expansion of a network of flight connections followed imperial axes and relied on transimperial interactions.

Greiner emphasised that those networks had material as well as immaterial aspects. While juridification and cooperation was organised through international organisations, aviation was very much anchored on the (local) ground. For example, transcontinental flights had to stop repeatedly, and the locals who performed maintenance and repair on the ground helped to create and preserve important knowledge and served as cultural brokers. These actors influenced globalisation very concretely by, for example, shaping global routes that integrated new aerial connections into their own mobility networks. But just as aviation enabled inclusion by connecting previously inaccessible spaces, it could exclude, as when previously connected regions were excised from the network.

Boris Belge provided another example of this sort of dis:connection. He observed that the history of the Port of Odessa defies common narratives of globalisation: when globalisation gained momentum in the second half of the 19th century, a discourse of crisis emerged that eventually contributed to the port city’s decline. Ironically in this case, the opening of one transportation infrastructure — the Suez Canal in 1869 — dis:connected another. The new canal warped Odessa’s trade routes as some trade flows dropped markedly. But new ones, like the tea trade, also blossomed. 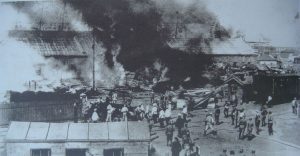 It would hardly be the final challenge the Port of Odessa would face. (Image: Wikimedia)

With ballast, one of the backbones of global shipping in the 19th century, Paul Blickle showed that dismantling infrastructure could go hand in hand with more flexible connections. In an important shift in the second half of that century, the long-favoured sand, stone and iron ballast were replaced by sea water. This move also marked a change from a shoreline-ballasting infrastructure towards individual installations on ships. Blickle further pointed out what might count as a particular case of dis:connection: despite widespread demand for ballast, it never developed into a commodity.

The language of flows, networks, connections and the historical baggage this language carries often hide uneven power relations that were established or maintained through infrastructure. Networks, again, provide a clear demonstration. The common image of ‘flat’ networks suggests equality. Accordingly, in historiography network is often used to tell stories of equality or participation. Hierarchies and power relations fade into the background. But our exploration of concrete infrastructure projects with an eye to dis:connection suggests that such relations may be obscure, but they do not disappear. All case studies presented made this point very plainly. The contributions demand greater attention to how infrastructures reflect uneven power relations, ignore specific people and places, and replace existing infrastructure systems.

But just as infrastructures can be tools of power, they can also be tools of resistance, subversion and appropriation by marginalised actors. Many of the participants agreed on the importance of (local) agency. While Belge remarked that actual people are often absent in the classical economic histories of Odessa’s rise and decline, Menger recalled how oil infrastructures relate to human mobility and how the global oil-based connections cut other, pre-existing connections. Liebisch stressed that, as much as airports are sites of migration control, they are also sites of individualised resistance against such control.