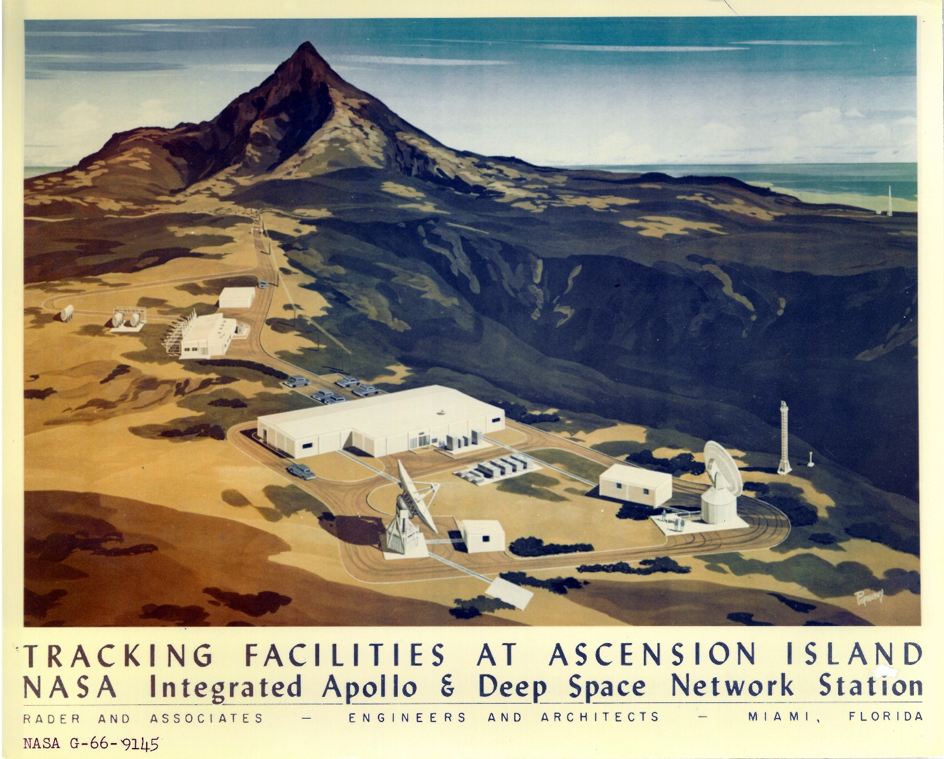 The visual archive of NASA’s Goddard Space Flight Center contains countless fascinating images, among them photographs of the first men on the moon and dozens of variations of the ‘blue marble,’ which never cease to amaze. Even among this fascinating collection, image G-66-9145 stands out.

The painting depicts NASA’s Manned Space Flight Network Station[1]on Ascension Island, which — thanks to its important role in the Apollo missions — is referred to as Integrated Apollo & Deep Space Network Station on the painting itself. The credits inform us that the 1966 painting was commissioned by Miami architects Rader and Associates, who designed several missile-tracking stations for the US government at that time. The painting shows a number of cuboid, single-story buildings connected via roads to two huge antennae and supply facilities. All buildings and facilities are painted white. By itself, it is not a particularly bright white. Set against a mostly ochre, dark background, however, the network station almost seems to shine. Indeed, the entire landscape that surrounds the station is almost surreally barren and desolate. Even the mountain that rises in the background is hardly inviting. Behind the barren scenery, a small glimpse of the sea betrays that the setting is coastal or, indeed, insular.

It is safe to assume that the intention behind the painting was strictly functional. It probably served to inform the contracting authorities about how Rader and Associates envisioned the station and where exactly it was to be set. Still, the image tells an eloquent story about the remoteness of Ascension Island, its tracking station and the dis:connectivity in which it was immersed.

Comparing the painting to contemporary photographs of the station and its surroundings, which, by the way, carry the telling name of ‘Devil’s Ashpit’, it emerges that this depiction of barrenness comes surprisingly close to reality. Ascension is a small, remote, volcanic island in the South Atlantic. When the Portuguese first landed in 1501, they found an unwelcoming place. They never settled.

Two hundred years later, the Dutch had little more interest in the island. Once, in 1725, they used it to maroon the seaman Leendert Hasenbosch as a punishment for alleged sexual misconduct. They left Hasenbosch to starve to death.[2]

Only in 1815 did the British Navy establish a small station on Ascension. Napoleon had been exiled to neighbouring (though still 1.300 km distant) St Helena, and the British wanted to keep an eye on him.

Over the following decades, Ascension developed into a shipping waystation, but constantly suffered from the lack of local supplies and freshwater. Practically all supplies had to be brought in from elsewhere — a complicated and expensive endeavour.

This is what Charles Darwin found and documented when he visited the island on his return journey on HMS Beagle in 1836. Seven years later, Joseph Dalton Hooker, on his way home from a four-year expedition to the Antarctic, also called at Ascension. The botanist, who would later become the director of the Royal Botanical Gardens at Kew, was asked by British officers whether he saw any way to improve Ascension’s environment in terms of its habitability. Hooker thought about the matter and came up with the idea of importing trees and other plant species to generate a natural freshwater supply and better soil conditions on the island.

After his departure for England, the Navy started to implement Hooker’s plans, importing seeds and seedlings in massive quantities from all over the world —Argentina, South Africa and Kew Gardens.[3] Hooker’s plan worked better and faster than expected. Within two decades, Ascension developed a diverse ecosystem and a more favourable microclimate. What had been a barren rock began to flourish. The island’s highest peak was soon referred to as Green Mountain.

In the second half of the nineteenth century and Hooker’s wake, Ascension Island became the scene of an experiment in terraforming avant la lettre. This enterprise could only work thanks to the isolation of the island.

The experiment was generally successful, but it did not convert the entire island into Eden. The peak in the background of our painting is a less-lush part of Green Mountain, and the region of Devil’s Ashpit itself remained uninviting, which was one of the reasons why NASA selected it as the setting for the tracking station. There was no other activity in the area. Or, as it says in the official booklet on the station that NASA had prepared in 1967, ‘This ensures maximum protection from noise or interference’[4] from other communications facilities on the island. So, the Devil’s Ashpit tracking station was located in a remote corner of an already extremely remote island.

In the 1960s and early 1970s, between 50 and 100 NASA personnel were working there. ‘There were 16-hour workdays, no TV, and Ascension was the only site where employees couldn’t bring their families. It was that remote’.

And yet, precisely because of its remoteness, Ascension occupied a central role first in terrestrial, then in extra-terrestrial, communication. Already in 1899, the island became the site of a relay station in the emerging global telegraph network, as its location conveniently completed the telegraphic connection between Europe, South America and southern Africa.

During the Second World War, the American Air Force had an airfield built on Ascension to refuel its bombers. And in the 1960s, the tracking station at Devil’s Ashpit played a central role in NASA’s Apollo missions. It was part of a network of 17 tracking stations distributed around the entire globe to secure constant communication with Apollo spacecraft.[5]

Rumours have it that the staff at the Ascension Island station were the first people on Earth to hear that “the Eagle ha[d] landed”. During the crucial phase of Apollo 11, however, the station was in Earth’s radio shadow and could neither have seen nor heard Neil Armstrong make his ‘small step’ — not even on regular television, as most of the world did on 20 July 1969. There was no terrestrial television signal on Ascension.

In 2010, the BBC unearthed the remarkable story of Ascension’s ecosystem. BBC science reporter Howard Falcon-Lang was clearly impressed by the terraforming experiment. ‘By a bizarre twist, this great imperial experiment may hold the key to the future colonization of Mars’, he wrote and quoted a contemporary ecologist who is convinced that much can be learned from Ascension for the future establishment of human colonies beyond earth. This is, quite clearly, too bold a claim.

Nevertheless, Ascension Island did play an important role in imperial history, in environmental engineering and in extra-terrestrial exploration — if only to the moon. This role was defined by the island’s peculiar mixture of remoteness and centrality, the interplay of disconnection and connectivity. Taken together, this created a specific setting that NASA image G-66-9145 ingeniously captures and highlights: a setting of global dis:connectivity.