On the Ambivalence of Flags 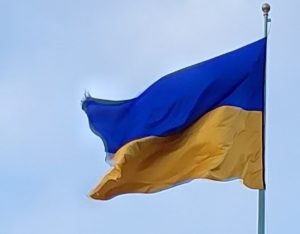 [1] Flagge zeigen in German means to speak up for yourself in a situation of conflict. It’s a form of solidarity, but it’s also an announcement of your own ethical beliefs and convictions. In other words, Flagge zeigen is a declaration of politics, and as such it has been used and abused in many ways throughout history. In English, we might say that ‘to fly the flag’ is advocating for a good cause, like freedom for example. During the COVID-19 pandemic especially, ‘freedom days’ have been used and abused far too often in political rhetoric. The contrast to our widespread disconnection throughout the various lockdowns and isolations, witnessing far too many deaths of people we love around the world, was simply too glaring.

And so it is that I wonder about the ambivalence of flags these days. So many have been flying them as a declaration of solidarity with those who suffer from a war that seems to be penetrating our living rooms and smart phones from those on the front lines. This time, however, they are not healthcare workers, but the families and president of the Ukraine who have been attacked by a disease much more lethal than COVID, namely Vladimir Putin’s military aggression. Flags in yellow and blue have suddenly sprouted like spring blossoms everywhere in support and solidarity with the Ukraine.

Yet whether we are taking a stand for nationalism, freedom, independence, war, or peace is less clear in such symbolic gesturing than it was when we were collectively clapping for the bravery of healthcare workers only two years ago. Isn’t that the beauty of such performative gestures in the twenty-first century, though, that they are so easily distributed and shared around the globe via internet memes and hashtags? The ambivalence of national flags, it strikes me, is that they evoke myths of nationalism and defence that are always tied to the imagery of war and exclusion. As David Frum articulates this binary conundrum in his recent contribution on the Ukraine war in The Atlantic:

“In Ukraine a new national myth is being created. It’s a myth of collective resistance to violent foreign tyranny of a citizen army fighting for European liberal and democratic values. Wars almost always make societies more tribal, more authoritarian, more violent, and more inhumane. But sometimes – as with the Western Allies in World War II, the North in the U.S. Civil War, and perhaps now in Ukraine – a war for ideals and principles can challenge a society to become what it says it is fighting for, even if it does not yet wholly live up to the ideals it espouses. If Ukraine survives and prevails, this new myth will propel the country toward a better future.” [2]

And indeed, in hope for such a better future we wave our Ukrainian flags collectively. But what if it gets worse? If waving flags for freedom, does not bring the hoped-for changes in search for a better life for all of us? To the extent that we are willing to stand with these liberal values in the West then, we are happy to fly the Ukrainian flag and hope for this future. Though the flag itself carries almost always the burden of this ambivalence of not knowing whether war itself can ever bring such a future or rather the danger of eternally returning to the same fraudulent promises of liberation that, so far in history, have never liberated us from war, but only created more violence, trauma and retaliation elsewhere.

Flags as such therefore remain problematic national symbols for me, because whether they are raised in mourning or remembrance of the dead, their symbolic waving in the wind doesn’t quite cost us as much as giving our own lives joining the army or even just whole-heartedly embracing the full consequences of an economic embargo on Russian gas. At the same time flags are meant to spur us somewhat militaristically, if only in our entrenched and polarised opinions on the political issues at stake. The flag, indeed, is a powerful theatrical prop. It permits us to indulge in the hope and glory of victory. Flags have been dear to us ever since we stood and waved as children, cheering a military parade of horses and glorifying the cavalry.

In those moments of global flag solidarity, it strikes me then, that those deep unquestioned childhood memories are invoked so that we seem too quick to identify with the Ukraine, as if we were fighting alongside those who suffer, feeling good about our shared liberal values in the West and defending an idealized notion of Western democracy we gained after the Second World War rather than questioning our own contribution to this war. In this gesturing for solidarity do we not forget how we ourselves are deeply implicated in these conflicts by buying into Putin’s resurrection of military aggression in this brutal showdown of old wounds and horrors we only wanted to believe had been overcome in 1989 by counting ourselves morally superior and on the right side of history — somehow? 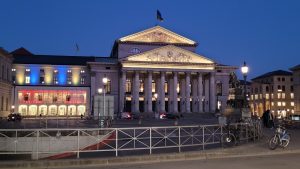 Flags and Illumination on top of Residenztheater Munich, March 2022.

As I wander Munich these days, Ukrainian flags are blowing everywhere with these thoughts and questions arising on every step I take. Like the answers we once wanted to give, as we came of age, listening to the songs by Bob Dylan. Swearing off war forever, again. I watch out for these flags. On top of the theatre buildings. Flags. Hanging from the cathedral at Marienplatz. More flags. In the same colours illuminating the façade of the Munich Museum for Egyptian Art and when I turn on my computer in the morning to browse the online catalogue of the Bavarian State Library.

Suddenly, the Ukrainian flag became so ubiquitous in only a week that I started reading every instance of blue and yellow as a national symbol, and yet I struggled to decipher the meaning of these colours. What do these flags stand for in a public debate about war and peace in Europe?

The Ukrainian flag at Marienplatz, for example, hangs right next to the European flag, which is also blue but adorned with too-familiar little yellow stars, one of which we sadly lost in another public debate — or referendum rather — only a few years ago. But God and country forbid, we just add the Ukraine as another little star to replace our former friend in arms, rule Britannia. There must be more debate than that. 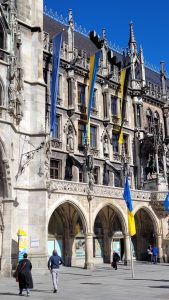 Farther down the road, next to those pretty blue and yellow flags, the German flag waves in gold (not yellow!), black and red. It is the most ambivalent for me, as it drapes right next to the Bavarian flag of sky blue and white that decorates every beer and sausage here, in a wave of happy or not so happy flags swinging synchronised in the sunshine of early spring. The more of them there are in any city, the merrier is their palette of colours. Flags. Yet, how moody they are, as well, when there is suddenly no wind at all, and the rain just hammers them down into unrecognizable, sopping rags.

Flags in the rain, like odourless plastic flowers. And if flags had a scent, who knows of what they might stink of? Walking through Munich, traces of the Nazi past linger everywhere, even today. This memory will haunt any flag of any colour for all time in Hitler’s city. This is especially true in our so-called ‘Europe’, a mythic geography haunted by the history of flags as signs of supposed liberation. Flags have always emblazoned its political movements, their long histories of bitter wars, and the violence in their colonies and at home.

The same rhetoric the Nazis used has returned uncannily in the way that Putin is playing the eternal Wiedergänger of history.[3] Whilst we can easily demonise Putin, the former KGB agent, as we must, it was the former German chancellor who made the deals and all of us happily burning the oil and gas in a scramble for resources following the fall of the Berlin Wall. And are we not concerned for the state of human rights in Qatar as Germany’s first Green Minister of Economic Affairs sells his innocence? ‘Death is a master from Germany’: we recall the words of Paul Celan, as we might all soon be struck dead by nuclear weapons once and for all.

I walk past the Munich Kammerspiele and read No War in Europe, wondering about our amnesia towards all the other wars we’ve been forgetting. We’ve been trading the politics of war in every weapon sold to foreign countries, which have in turn become warzones at the borders of Europe, closing in on us with every wave of refugees. Never mind that we forgot to buy more weapons ourselves here in Germany, blind-sided in our hope for peace, forgetting the cost of our peace in the wars elsewhere. Or so the news says.

The ambivalence of flags is the politics of nationalism they represent under an EU or NATO banner. How can we dis:connect the flags we wave from the problematic politics of nationalism and its ambivalence? Is it by disconnecting their invented traditions and traumatic memories of wars of us versus them, which leads unavoidably to renewed imperialism and war on both sides? If history ever taught us anything, it would be this. 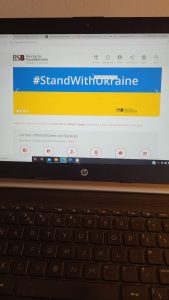 It seems to me the flag of solidarity is the perfect symbol of global dis:connect. It suggests a togetherness and connection that always comes at the cost of violence such imagined communities unleash by default. After all, the innocence of flags cannot be won without war and weapons that destroy lives and countries. Ultimately, the ambivalence of flags is such that every life lost under the flag is a life that ended too soon. And the ‘we’ who wave flags, must never forget this as we continue to hope for peace.

[1] All images by Sabine Sörgel.

[2] Why Ukraine Is a Nation Worth Fighting For – The Atlantic

[3] A Wiedergänger means literally, ‘one who walks again’ — a zombie. Echoes of Nietzsche’s eternal return are no accident.