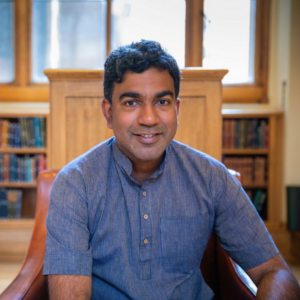 The center extends a warm welcome to Sujit Suvasundaram (Cambridge) who joins as a new research fellow for the year 2022.

Sujit has taken a circuitous path to his current post as Professor of World History and Director of the Centre of South Asian Studies in Cambridge. Bouncing between the Asia-Pacific region and Europe, he has left his mark on imperial history, oceanic history, cultural history, and the history of science. This path has taken him through the LSE, the EHESS in Paris, the Universities of Singapore and Sydney, and the National Maritime Museum in Greenwich. During his fellowship with us in Munich, Sujit will be focusing on the long history of Colombo. He is interested in the challenges of building a city such as this, at the centre of the Indian Ocean, in a marshy terrain, and the labour and community formation that met such an environmental challenge. He will be developing his perspective on connection as an unstable practice, especially when tied to capitalism and empire, because of its potential to segment and divide places and people. He is also interested in the art and visual practice surrounding this city and what it tells us of how globalisation is visualised and propagandised.